Connecting experiences, events and volunteers in solidarity and action, focusing on current refugee and humanitarian situation in the Balkan region and Europe. 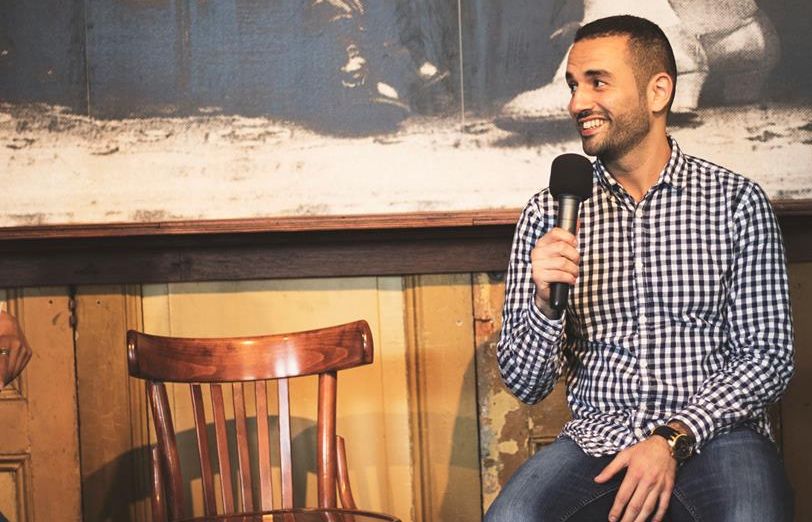 Refugees might have disappeared from our screens and news feed, but they are present and active in our society. This is another story of integration, special because it contradicts the myths and the labels put on most refugees that have crossed the Balkans to find a safe place in Europe. After talking with Razan about her journey and her work with the “We” organization, we wanted to know more about the activities and scope of this “young social initiative aiming to develop projects tackling difference in society, fight xenophobia, build bonds and promote social inclusion”. So we sat down, aided by modern technology, with Adel Albaghdadi, founder of the organization.

Adel told us that the organization was born of a desire to shift the burden of refugees, from being (usually) seen as passive recipients of aid and solidarity, to being themselves igniters of change in their hosting societies. As he recalls, “when I came to the Netherlands, I noticed that most initiatives were from the host society to the refugees, but not all of them were targeting and reaching their goals”. This story of self-empowerment and inversion of expectations, started with a video made by Adel showing his life in the refugee center and continued with short presentations in schools, universities and companies. Now the organization is a relevant part of the city.

One of its most striking features is the work with elderly people, a neglected segment of our societies. This initiative, aptly named “We are the elderly”, is based on the need to convey other cultures through music and entertainment to a population that is mostly isolated in elderly houses and apart from their families. Elderly are also, in Adel’s words, the segment of the Dutch population that is generally more “scared and afraid of the immigrants and of the refugees”. This is why, not to mention Adel’s passion and affection for the senior, these cultural soirées were born. The plan is to expand them and to present different cultures, other than his own Syrian culture.

The reaction of Dutch citizens, young and older, to the activities proposed by Adel and Razan is generally positive, despite the negative images of “new comers” portrayed in the media and public discourse, sadly prevalent and enduring. The most important thing to avoid this trap, Adel states, is the human touch, the one-on-one meeting, the moment where change and togetherness is allowed to happen:

“I remember one time, we danced with the elderly and a 102 years-old Dutch lady was on a wheel chair, but she was so energetic. I carried her from the front and she put her hands in my shoulders. And she was super joyful, it was such a nice experience. For me, those were really touching moments.”

The happiness, joyousness and self-assurance of Adel is easy to spot, not only in our conversation, but in his Ted talk, and in a video captured by a Dutch television of an earnest and heartfelt conversation with an old lady, where both allow themselves to discover and be discovered. Was this charisma and will to live, to do and to create that got the attention of fellow Syrians and Eritreans living in the center, who got together, through Adel’s initiative, to clean the forest and cut a path for the pedestrians? Pedestrians who, in their turn, were happy and supportive of the initiative? This was one of the ways to start a dialogue with the locals and to occupy the people in the center. Is this why Adel titles himself “an igniter of change”?

Despite the humor and positive vibe that Adel gives out, the experience in a refugee center marked him. Adel’s warning for everyone to pay attention for refugees’ mental health and to offer viable alternatives to life in camps and afterwards is strong. After all, as he asks, what will happen to “people that are mostly living alone, without contact with their family and possibly facing traumas, due to persecution or war”? Mental health among refugees seems to be the least of priorities for public officials, preceded by broader concerns for employment and integration, but it surely is not without its consequences.

But what is remarkable in Adel is this willingness not to allow anyone, not even himself to be limited by any label. The words we give or that were given to us, the words we fill with meaning, are to be disputed. Why should society as a whole, Adel rightly inquires, judge and penalize people who did not choose to be part of a minority or suffer from a disease, blindness or handicap? Adel won’t let anyone define him or the labels that inhabit him. He does that by reversing the expectations, images and boxes that are deposited upon the new comers. And mostly, as he says, by “claiming his experience” and asking with a big exclamation point: “I am a refugee, what is wrong with that?!” Indeed Adel, what is wrong with that?!